EIOPA identified potential divergences in the supervisory practices concerning the supervision of the SCR calculation of immaterial sub-modules.

EIOPA agrees that in case of immaterial SCR sub-modules the principle of proportionality applies regarding the supervisory review process, but considers it is important to guarantee supervisory convergence as divergent approaches could lead to supervisory arbitrage.

EIOPA is of the view that the consistent implementation of the proportionality principle is a key element to ensure supervisory convergence for the supervision of the SCR. For this purpose the following key areas should be considered:

This approach should not be used when calculating SCR at group level.

An SCR sub-module should be considered immaterial for the purposes of the SCR calculation when its amount is not relevant for the decision-making process or the judgement of the undertaking itself or the supervisory authorities. Following this principle, even if materiality needs to be assessed on a case-by-case basis, EIOPA recommends that materiality is assessed considering the weight of the sub-modules in the total BSCR and

For immaterial SCR sub-modules supervisory authorities may allow undertakings not to perform a full recalculation of such a sub-module on a yearly basis taking into consideration the complexity and burden that such a calculation would represent when compared to the result of the calculation.

For the sub-modules identified as immaterial, a calculation of the SCR submodule using inputs prudently estimated and leading to prudent outcomes should be performed at the time of the decision to adopt a proportionate approach. Such calculation should be subject to the consent of the supervisory authority.

The result of such a calculation may then be used in principle for the next three years, after which a full calculation using inputs prudently estimated is required so that the immateriality of the sub-module and the risk-based and proportionate approach is re-assessed.

During the three-year period the key function holder of the actuarial function should express an opinion to the administrative, management or supervisory body of the undertaking on the outcome of immaterial sub-module used for calculating SCR.

Such a system should be proportionate to the risks at stake while ensuring a proper monitoring of any evolution of the risk, either triggered by internal sources such as a change in the business model or business strategy or by an external source such as an exceptional event that could affect the materiality of a certain sub-module.

Such a monitoring should include the setting of qualitative and quantitative early warning indicators (EWI), to be defined by the undertaking and embedded in the ORSA processes.

Undertakings should include information on the risk management system in the ORSA Report. Undertakings should include structured information on the sub-modules for which a proportionate approach is applied in the Regular Supervisory Reporting and in the Solvency and Financial Condition Report (SFCR), under the section “E.2 Capital Management – Solvency Capital Requirement and Minimum Capital Requirement”.

In some situations supervisory authorities may require a full calculation following the requirements of the Delegated Regulation and using inputs prudently estimated.

Undertakings should include information on the risk management system referred to in the previous paragraphs in the ORSA Report.

Undertakings should include structured information on the sub-modules for which a proportionate approach is applied in the Regular Supervisory Reporting, under the section “E.2 Capital Management – Solvency Capital Requirement and Minimum Capital Requirement” (RSR), including at least the following information:

Undertakings should also include structured information on the sub-modules for which a proportionate approach is applied in the Solvency and Financial Condition Report, under the section “E.2 Capital Management – Solvency Capital Requirement and Minimum Capital Requirement” (SFCR), including at least the identification of the submodule(s) for which a proportionate calculation was applied.

An example of structured information to be included in the regular supervisory report in line with Article 311(6) of the Delegated Regulation is as follows: 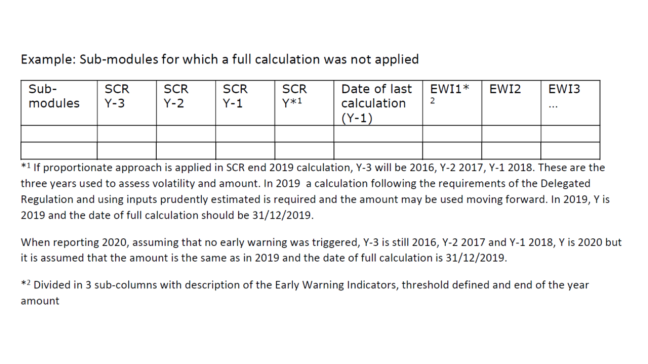 This proportionate approach should also be reflected in the quantitative reporting templates to be submitted. In this case the templates would reflect the amounts used for the last full calculation performed.