The unexpected COVID-19 virus outbreak led European countries to shut down major part of their economies aiming at containing the outbreak. Financial markets experienced huge losses and flight-to-quality investment behaviour. Governments and central banks committed to the provision of significant emergency packages to support the economy, as the economic shock, caused by demand and supply disruptions accompanied by its reflection to the financial markets, is expected to challenge economic growth, labour market and the consumer sentiment across Europe for an uncertain period of time.

Amid an unprecedented downward shift of interest rate curves during March, reflecting the flight-to-quality behaviour, credit spreads of corporates and sovereigns increased for riskier assets, leading effectively to a double-hit scenario. Equity markets dramatically dropped showing extreme levels of volatility responding to the uncertainties on virus effects and on the status of government and central banks support programs and their effectiveness. Despite the stressed market environment, there were signs of improvement following the announcements of the support packages and during the course of the initiatives of gradually reopening the economies. The virus outbreak also led to extraordinary working conditions, with part of the services sector working from home, which rises the potential of those conditions being preserved after the virus outbreak, which could decrease demand and market value for commercial real estate investments.

Within this challenging environment, insurers are exposed in terms of solvency risk, profitability risk and reinvestment risk. The sudden reassessment of risk premia and the increase of default risk could trigger large-scale rating downgrades and result in decreased investments’ value for insurers and IORPs, especially for exposures to highly indebted corporates and sovereigns. On the other hand, the risk of ultra-low interest rates for long has further increased. Factoring in the knock on effects of the weakening macro economy, future own funds position of the insurers could be further challenged, due to potential lower levels of profitable new business written accompanied by increased volume of profitable in-force policies being surrendered or lapsed.

Finally, liquidity risk has resurfaced, due to the potential of mass lapse type of events and higher than expected virus and litigation related claims accompanied by the decreased inflows of premiums.

For the European occupational pension sector, the negative impact of COVID-19 on the asset side is mainly driven by deteriorating equity market prices, as, in a number of Member States, IORPs allocate significant proportions of the asset portfolio (up to nearly 60%) in equity investments. However, the investment allocation is highly divergent amongst Member States, so that IORPs in other Member States hold up to 70% of their investments in bonds, mostly sovereign bonds, where the widening of credit spreads impair their market value. The liability side is already pressured due to low interest rates and, where market-consistent valuation is applied, due to low discount rates. The funding and solvency ratios of IORPs are determined by national law and, as could be seen in the 2019 IORP stress test results, have been under pressure and are certainly negatively impacted by this crisis. The current situation may lead to benefit cuts for members and may require sponsoring undertakings to finance funding gaps, which may lead to additional pressure on the real economy and on entities sponsoring an IORP. 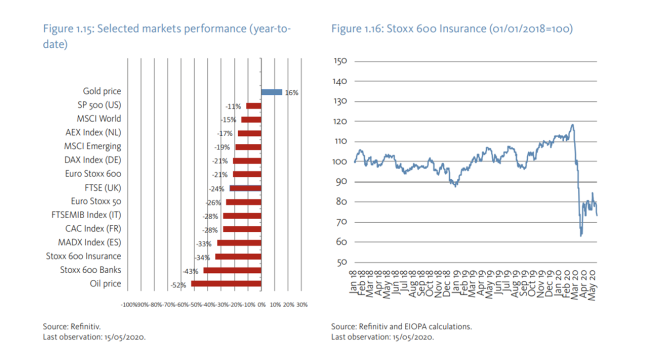 Climate risks remain one of the focal points for the insurance and pension industry, with Environmental, Social and Governance (ESG) factors increasingly shaping investment decisions of insurers and pension funds but also affecting their underwriting. In response to climate related risks, the EU presented in mid-December the European Green Deal, a roadmap for making the EU climate neutral by 2050, providing actions meant to boost the efficient use of resources by

Cyber risks have become increasingly relevant across the financial system in particular during the virus outbreak due to the new working conditions that the confinement measures imposed. Amid the extraordinary en masse remote working arrangements an increased number of cyber-attacks has been reported on both individuals and healthcare systems. With increasing attention for cyber risks both at national and European level, EIOPA contributed to building a strong, reliable, cyber insurance market by publishing its strategy for cyber underwriting and has also been actively involved in promoting cyber resilience in the insurance and pensions sectors.