Data processing has historically been at the very core of the business of insurance undertakings, which is rooted strongly in data-led statistical analysis. Data has always been collected and processed to

There has long been a pursuit of more granular data-sets and predictive models, such that the relevance of Big Data Analytics (BDA) for the sector is no surprise.

In view of this, and as a follow-up of the Joint Committee of the European Supervisory Authorities (ESAs) cross-sectorial report on the use of Big Data by financial institutions,1 the European Insurance and Occupational Pensions Authority (EIOPA) decided to launch a thematic review on the use of BDA specifically by insurance firms. The aim is to gather further empirical evidence on the benefits and risks arising from BDA. To keep the exercise proportionate, the focus was limited to motor and health insurance lines of business. The thematic review was officially launched during the summer of 2018.

A total of 222 insurance undertakings and intermediaries from 28 jurisdictions have participated in the thematic review. The input collected from insurance undertakings represents approximately 60% of the total gross written premiums (GWP) of the motor and health insurance lines of business in the respective national markets, and it includes input from both incumbents and start-ups. In addition, EIOPA has collected input from its Members and Observers, i.e. national competent authorities (NCAs) from the European Economic Area, and from two consumers associations.

The thematic review has revealed a strong trend towards increasingly data-driven business models throughout the insurance value chain in motor and health insurance: 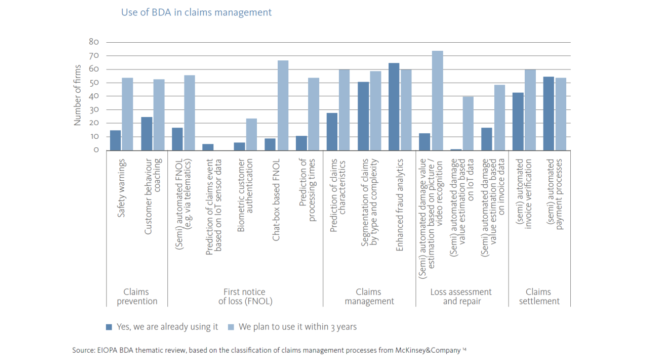 In view of the evidence gathered from the different stake-holders, EIOPA considers that there are many opportunities arising from BDA, both for the insurance industry as well as for consumers. However, and although insurance firms generally already have in place or are developing sound data governance arrangements, there are also risks arising from BDA that need to be further addressed in practice. Some of these risks are not new, but their significance is amplified in the context of BDA. This is particularly the case regarding ethical issues with the fairness of the use of BDA, as well as regarding the

of certain BDA tools such as AI and ML.

Going forward, in 2019 EIOPA’s InsurTech Task Force will conduct further work in these two key areas in collaboration with the industry, academia, consumer associations and other relevant stakeholders. The work being developed by the Joint Committee of the ESAs on AI as well as in other international fora will also be taken into account. EIOPA will also explore third-party data vendor issues, including transparency in the use of rating factors in the context of the EU-US insurance dialogue. Furthermore, EIOPA will develop guidelines on the use of cloud computing by insurance firms and will start a new workstream assessing new business models and ecosystems arising from InsurTech. EIOPA will also continue its on-going work in the area of cyber insurance and cyber security risks.

We are living in a progressively more connected world where smarter products and changing consumer expectations are disrupting nearly every industry. While the connected world is data intensive, complex to manage and challenging to harness, the opportunities for generating more value and new propositions are nearly endless.

Octo Telematics has invested in the development of algorithms and analytical tools to help our industry partners maximize opportunities from the connected world – and we continue to do so today. Through actionable intelligence based on the accurate analysis of data, industry partners can differentiate their products and services with innovative customer experiences.

Historically, insurance companies have made underwriting and pricing decisions based on static risk factors that are largely proxies for how, how much, when and where a vehicle is operated. By leveraging actual driving data, data scientists can build telematics-based risk scores that are significantly more predictive than any risk factor used by insurance companies today.

To get the full value from telematics, data scientists must have the right data and employ different techniques than those used for traditional actuarial analysis. Done correctly, insurers can create a score that provides

Failure to follow best practices for model development will result in sub-optimal lift that makes the business case less compelling. Lift is just one factor that should be considered. To be truly effective, any risk score should also be transparent, cost-effective, flexible, implementable and acceptable to regulatory bodies. Even the most predictive scores may not be effective if they fail one or more of these categories. 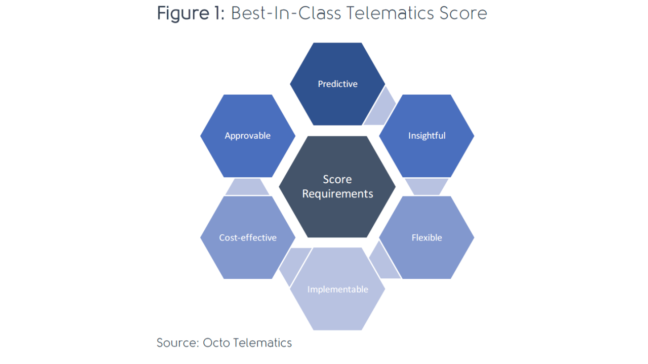