Last year’s Global Risks Report was published at a time of heightened global uncertainty and strengthening popular discontent with the existing political and economic order. The report called for “fundamental reforms to market capitalism” and a rebuilding of solidarity within and between countries.

One year on, a global economic recovery is under way, offering new opportunities for progress that should not be squandered: the urgency of facing up to systemic challenges has, if anything, intensified amid proliferating indications of uncertainty, instability and fragility. Humanity has become remarkably adept at understanding how to mitigate conventional risks that can be relatively easily isolated and managed with standard riskmanagement approaches. But we are much less competent when it comes to dealing with complex risks in the interconnected systems that underpin our world, such as organizations, economies, societies and the environment. There are signs of strain in many of these systems: our accelerating pace of change is testing the absorptive capacities of institutions, communities and individuals. When risk cascades through a complex system, the danger is not of incremental damage but of “runaway collapse” or an abrupt transition to a new, suboptimal status quo.

In our annual Global Risks Perception Survey, environmental risks have grown in prominence in recent years. This trend has continued this year, with all five risks in the environmental category being ranked higher than average for both likelihood and impact over a 10-year horizon. This follows a year characterized by high-impact hurricanes, extreme temperatures and the first rise in CO2 emissions for four years. We have been pushing our planet to the brink and the damage is becoming increasingly clear. Biodiversity is being lost at mass-extinction rates, agricultural systems are under strain and pollution of the air and sea has become an increasingly pressing threat to human health. A trend towards nation-state unilateralism may make it more difficult to sustain the long-term, multilateral responses that are required to counter global warming and the degradation of the global environment.

Cybersecurity risks are also growing, both in their prevalence and in their disruptive potential. Attacks against businesses have almost doubled in five years, and incidents that would once have been considered extraordinary are becoming more and more commonplace. The financial impact of cybersecurity breaches is rising, and some of the largest costs in 2017 related to ransomware attacks, which accounted for 64% of all malicious emails. Notable examples included the WannaCry attack—which affected 300,000 computers across 150 countries—and NotPetya, which caused quarterly losses of US$300 million for a number of affected businesses. Another growing trend is the use of cyberattacks to target critical infrastructure and strategic industrial sectors, raising fears that, in a worst-case scenario, attackers could trigger a breakdown in the systems that keep societies functioning.

Headline economic indicators suggest the world is finally getting back on track after the global crisis that erupted 10 years ago, but this upbeat picture masks continuing underlying concerns. The global economy faces a mix of long-standing vulnerabilities and newer threats that have emerged or evolved in the years since the crisis. The familiar risks include potentially unsustainable asset prices, with the world now eight years into a bull run; elevated indebtedness, particularly in China; and continuing strains in the global financial system. Among the newer challenges are limited policy firepower in the event of a new crisis; disruptions caused by intensifying patterns of automation and digitalization; and a build-up of mercantilist and protectionist pressures against a backdrop of rising nationalist and populist politics.

The world has moved into a new and unsettling geopolitical phase. Multilateral rules-based approaches have been fraying. Re-establishing the state as the primary locus of power and legitimacy has become an increasingly attractive strategy for many countries, but one that leaves many smaller states squeezed as the geopolitical sands shift. There is currently no sign that norms and institutions exist towards which the world’s major powers might converge. This creates new risks and uncertainties: rising military tensions, economic and commercial disruptions, and destabilizing feedback loops between changing global conditions and countries’ domestic political conditions. International relations now play out in increasingly diverse ways. Beyond conventional military buildups, these include new cyber sources of hard and soft power, reconfigured trade and investment links, proxy conflicts, changing alliance dynamics, and potential flashpoints related to the global commons. Assessing and mitigating risks across all these theatres of potential conflict will require careful horizon scanning and crisis anticipation by both state and nonstate actors.

Our aim is to broaden the report’s analytical reach: each of these elements provides a new lens through which to view the increasingly complex world of global risks.

Future Shocks is a warning against complacency and a reminder that risks can crystallize with disorientating speed. In a world of complex and interconnected systems, feedback loops, threshold effects and cascading disruptions can lead to sudden and dramatic breakdowns. We present 10 such potential breakdowns—from democratic collapses to spiralling cyber conflicts—not as predictions, but as food for thought: what are the shocks that could fundamentally upend your world?

In Hindsight we look back at risks we have analysed in previous editions of the Global Risks Report, tracing the evolution of the risks themselves and the global responses to them. Revisiting our past reports in this way allows us to gauge risk-mitigation efforts and highlight lingering risks that might warrant increased attention. This year we focus on antimicrobial resistance, youth unemployment, and “digital wildfires”, which is how we referred in 2013 to phenomena that bear a close resemblance to what is now known as “fake news”.

In Risk Reassessment, selected risk experts share their insights about the implications for decisionmakers in businesses, governments and civil society of developments in our understanding of risk. In this year’s report, Roland Kupers writes about fostering resilience in complex systems, while Michele Wucker calls for organizations to pay more attention to cognitive bias in their risk management processes. 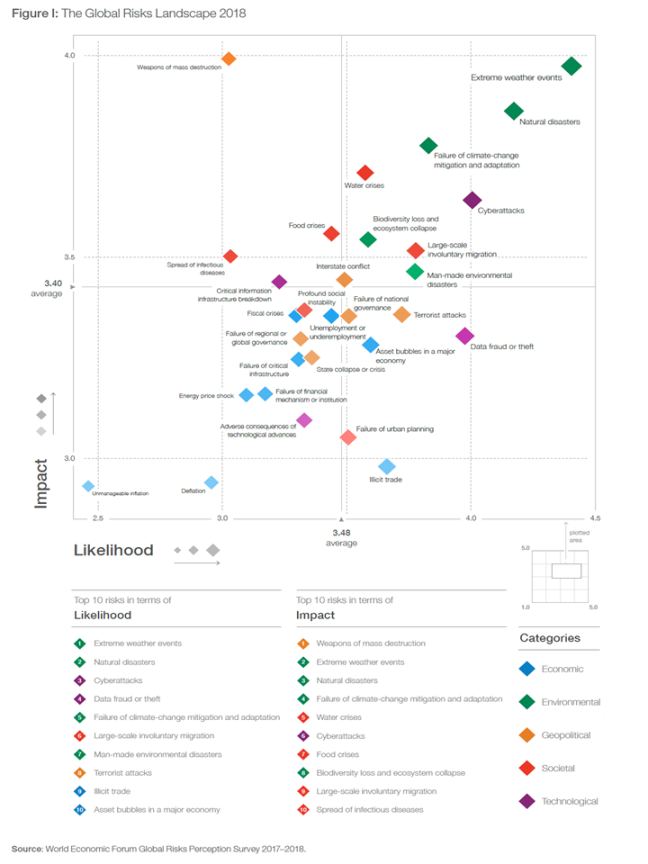 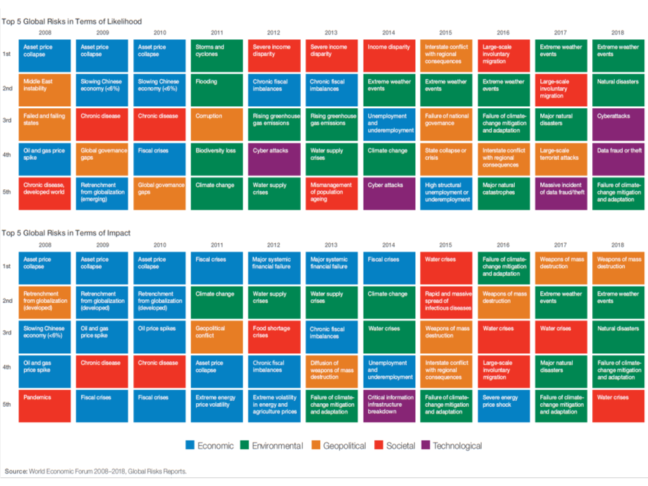 Since the global financial crisis began in 2007, gross cross-border capital flows have fallen by 65 percent in absolute terms and by four times relative to world GDP. Half of that decline has come from a sharp contraction in cross-border lending. But financial globalization is still very much alive—and could prove to be more stable and inclusive in the future.